Getting in the Holiday Spirit!

As we head into 2018, know that my resolve to serve as our next Treasurer of State remains unwavering. I have a vision for the Treasurer’s office that I know will help build a stronger future for all our families here in Ohio and I’m fully committed to making that vision a reality.

I am proud to announce that this week, I received the unanimous endorsement of the Franklin County Republican Party Central Committee! I am honored that these trusted Republican leaders have placed their confidence in me to serve as Ohio’s next Treasurer of State and I look forward to working together with them to earn the support of Franklin County voters.

We are excited that Christmas is just around the corner and everyone on Team Sprague has enjoyed getting in the spirit together while catching up with so many of our good friends at holiday parties, like the ones hosted by the Ohio Republican Party and the Xenia Women’s Club.

A Republican state treasurer candidate for 2018 met with fellow GOP members during a fundraising event Monday night in Defiance.

Ohio 82nd House District Rep. Craig Riedel of Defiance also formerly announced his candidacy for a vacant Ohio Senate seat during the event held for his benefit at the Second Story at 210 Clinton St. in downtown Defiance.

“We think we’ve got a great ticket and a great message to talk about how we can improve some financial concepts, people with developmental disabilities working out in the community,” said Sprague — a Duke University graduate, former auditor and treasurer for the city of Findlay, and former Ernst and Young employee — during an interview before speaking to Republicans Monday. “I think we can bring to bear new financial concepts that’s going to help with our heroin treatment — improve our heroin treatment — across the state with innovative financial products. We’ve got a lot of good messages to share.”

Among his plans is trying to strengthen “our national security” by having the state invest in Israel, “our greatest ally on the war on terror.”

And he wants “to try to help young people with some financial literacy when they are in high school so that they don’t make decisions that lead to a crippling amount of student loan debt.”

Of Mandel, Sprague said: “He’s done a great job. We’re going to build on what he’s done with the transparency, the open checkbook … to make it not just the transparent checkbook, but also a smart checkbook.”

The comment refers to the program initiated under Mandel’s watch in which various governments’ financial transactions are placed online.

During a brief speech Monday, Sprague elaborated on his message for managing the heroin crisis, proposing a pilot program for a “social impact bond.” He noted that at present Ohio’s heroin recovery rate is just 11 percent, which “if we were producing steel, we’d be out of business the next day.”

“How do you get out of this epidemic if you can’t get people into recovery, if — in terms of long-term recovery — you can’t get them better?” he asked. “And why are we spending hundreds of millions of dollars on treatment and wasting it on treatment that doesn’t work? One of the things I want to do in the treasurer’s office is bring to bear an interesting financial concept called a social impact bond.”

He explained that “this is where you take the money from the private sector — say like $1 million — and you put up a bond that says we’re going to try a new way to treat heroin addiction in the state of Ohio, and we run a two-year pilot program and at the end of the two-year pilot program we see what the results are. We measure the results, and let’s say they get a 35 percent recovery rate instead of an 11 percent recovery rate. Guess what? The state of Ohio will come in and we’ll buy back that bond … .”

POMEROY — “Unity within our Party and unity within our country” was the focus of Thursday’s Meigs County Republican Bean Dinner, as articulated by keynote speaker State Representative Robert Sprague.

Sprague (Findlay, District 83) spoke on campaign issues during the evening’s activities at Mulberry Community Center, and asked for support for his bid to secure the Republican nomination for Ohio Treasurer in the May primary.

“Public policy and platforms that help the people of Ohio is what I will bring to the Secretary of Treasurer’s Office. I want to use the office to address issues, like the opioid epidemic.”

Sprague has been serving as State Representative since 2011, and advocated public-private partnerships as a way to address the opioid epidemic, saying he would use social impact bonds to find better treatment options.

Impact bonds are a contract with the public sector to explore and develop new treatments. If the results have a positive outcome, the participant receives a return on their investment. If not, the state pays nothing.

“We need innovative ideas to find a solution to this crisis, and I believe social impact bonds are an opportunity to do so.”

Sprague also said Republicans needed to support the President “in the fight against radical Islamic terrorism,” and said the Treasurer’s office could do more to help build relationships with Israel by promoting state investments in that country.

“Israel is our strongest ally in the war on terror and in the Middle East. These investments would strengthen our ally,” he said.

A strong supporter of STABLE Accounts for those with developmental disabilities, if elected he said he would push to keep these accounts.

STABLE Accounts are not included when determining certain federal benefits such as Medicaid. This allows families and individuals with developmental disabilities to save and invest money for items such as housing and education without losing eligibility.

“Let’s ride the Trump wave to victory,” he closed, referring to all Republican candidates running for office in 2018.

Lorna Hart is a freelance writer for The Daily Sentinel.

The sunny skies and changing leaves have made for some beautiful drives as we’ve traveled across Ohio.  In the past month alone we’ve visited more than 20 counties! From Highland to Mahoning, Crawford to Wayne, we’ve been out and about meeting with local leaders and having a blast at GOP events all over our great state.

Thanks to all of our friends who have hosted us in their hometowns.  Support for Team Sprague continues to grow and we couldn’t do it without your help! 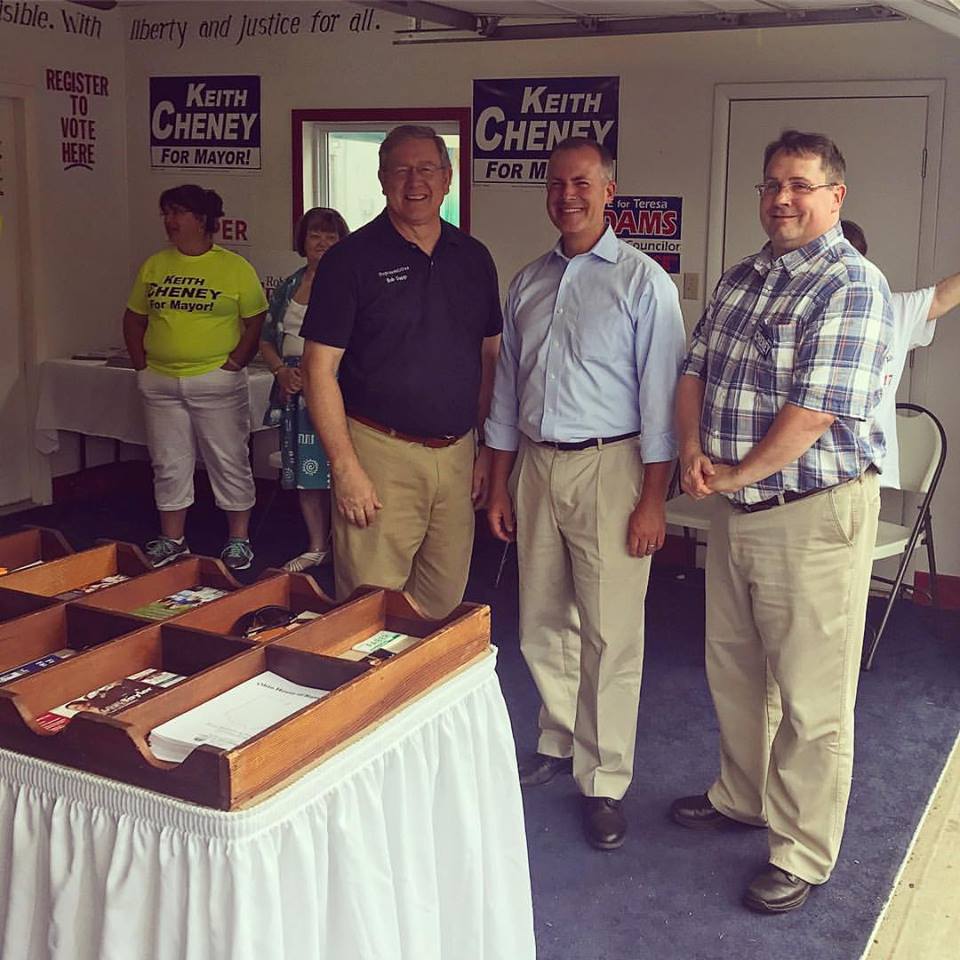 Spending time at the Allen County Fair with Representative Bob Cupp — Allen was just one of 30 fairs Team Sprague had the pleasure of going to this summer! 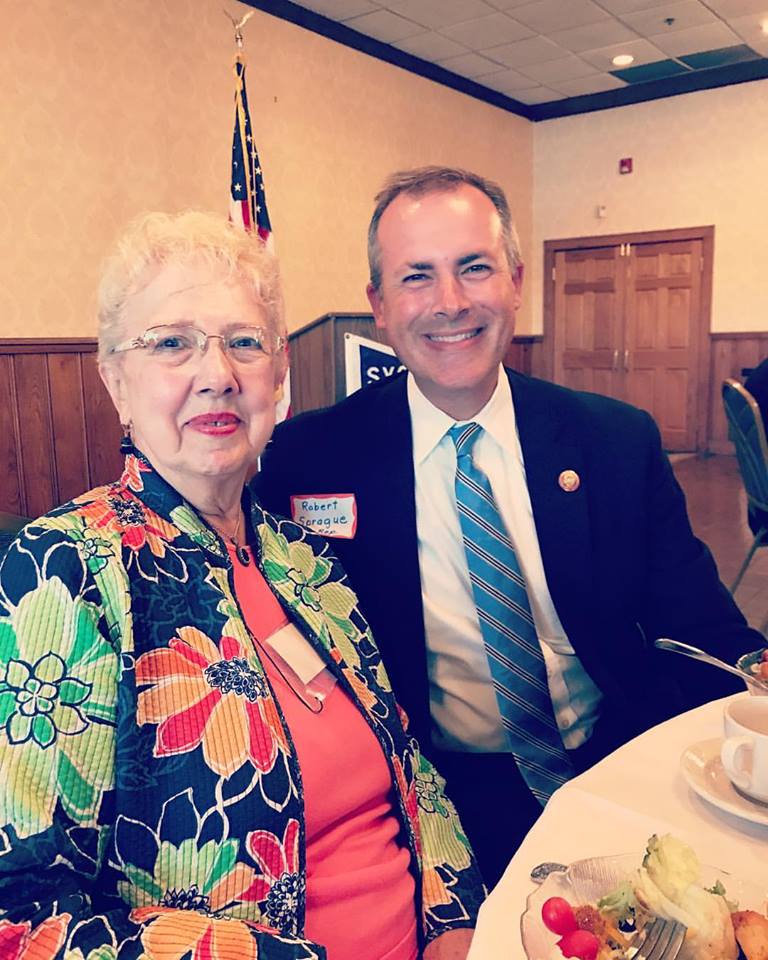 A big thank you to the Erie County Women’s Club for hosting Robert at their September meeting. Joanne does a fantastic job with the Women’s Club and we can’t wait to visit again soon! 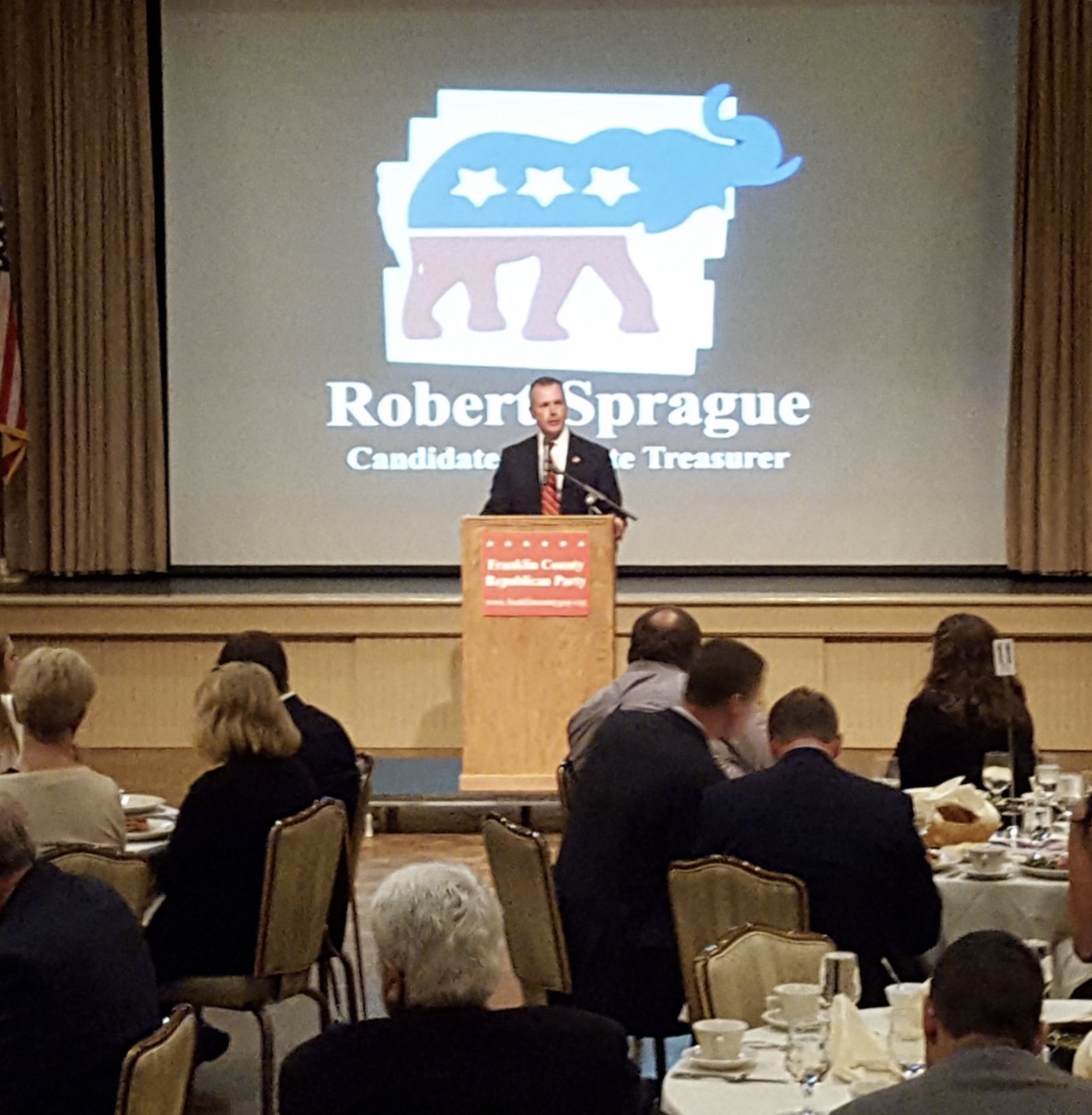 The Franklin County Republican Party had an impressive turnout at their Slate Dinner.

August and September have been very busy months for Team Sprague! Robert and the rest of the campaign team have been traveling the state attending as many County Fairs and local get-togethers as possible. While working the grill or walking through the barns, we’ve had a lot of fantastic conversations and made many new friends.

Miami, Darke and Mercer Counties sure know how to put on great fairs! Thanks to all the volunteers at the GOP booths for hosting us. 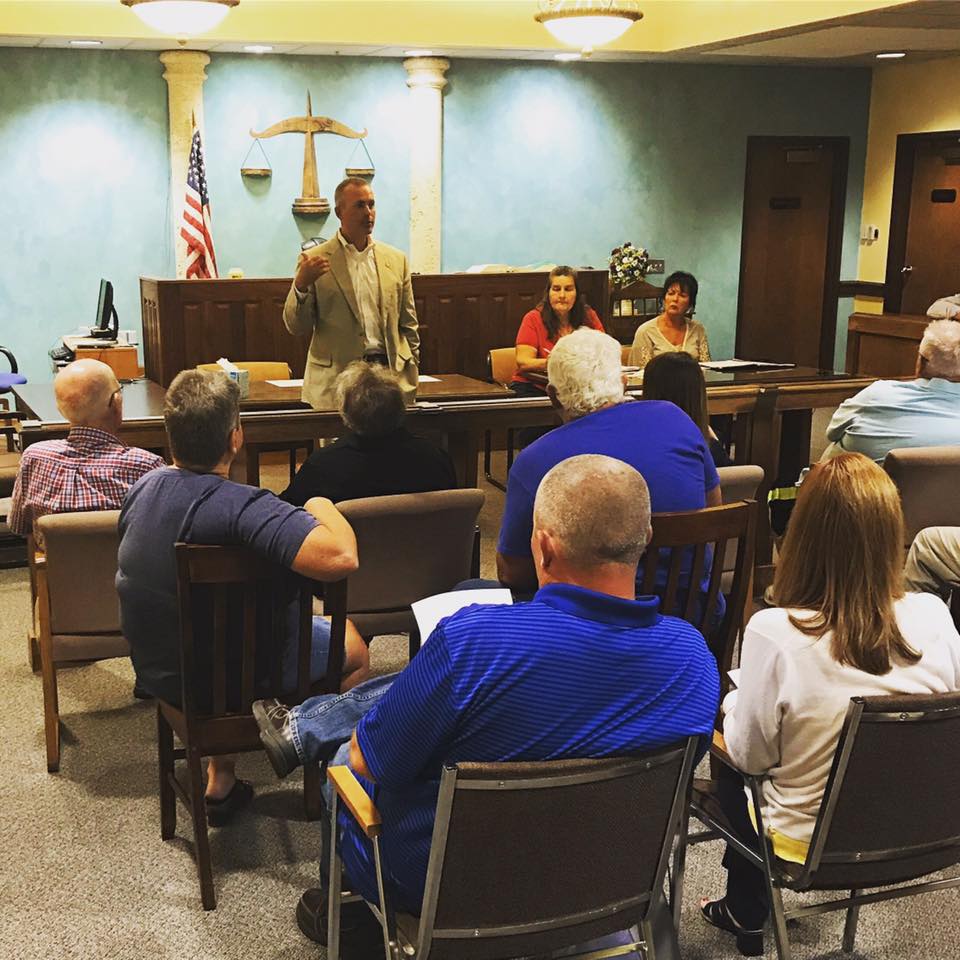 The GOP is strong in Jackson County! 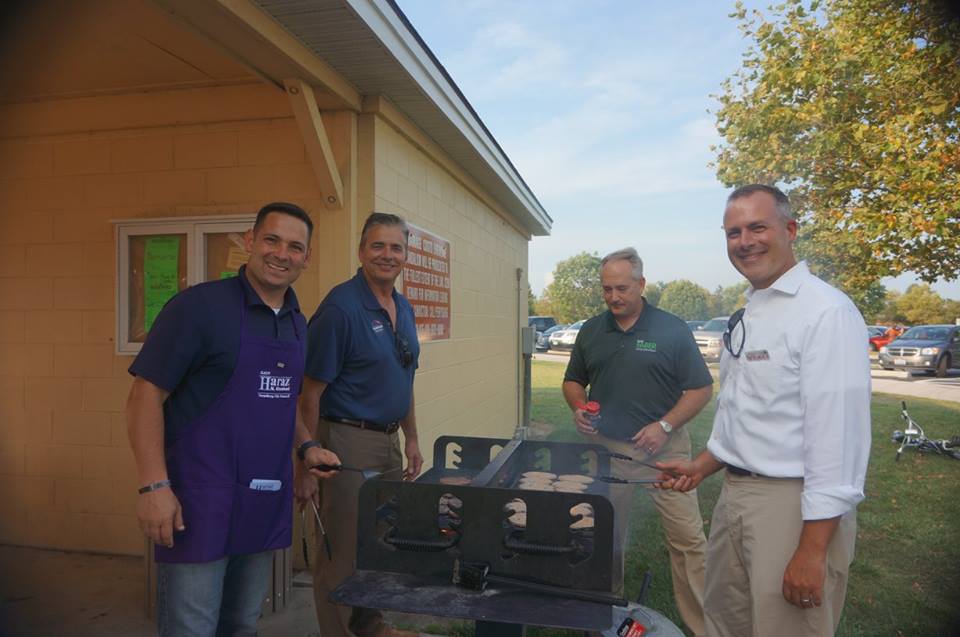 Listen to Robert talk about his ideas for the Treasurer’s office during an interview on WTTF.